- Zeleny Yar mummies have been discovered in Yamalo-Nenets Autonomous Okrug, Arctic area of Russia. These mummies are famous among concerned researchers and people in Russia. However, despite of its great academic value, about these mummies, very little is known to the outside world.

- Zeleny Yar mummies must be very important because these mummies are of 12th-13th century hunter-gatherer-fisherman people. Although there are many different kinds of mummies, most of them were farmers. Well-preserved bodies of 12th to 13th century Siberian hunter-gatherers are very rare. As they must have lived far differently from the farmers of the same period (food, health and diseases etc.), the studies on them could provide invaluable information to scholars. The mummies are not only important for scholars and people in this city, but also very crucial for the people around the world who love science.

- The Zelyeny Yar archaeological site in Yamalo-Nenets Autonomus Okrug has been investigated by pioneering Russian scholars, intermittently from 1999 to 2016. In the site, archaeologists discovered two medieval necropolises, dated 9th to 13th centuries. For the years, seventy-two burials were excavated. And of them, mummified remains were discovered in the burial ground of the 12th to 13th century, i.e., an adult subject, five children mummies, and multiple mummified fragments from different tombs.

- From the earliest times of discovery, these mummies attracted scientists’ attention in Russia. The fundamental archaeological and anthropological reports were made for these cases (Aleksashenko et al., 2005; Gusev, 2015; Gusev, 2016). In addition, pioneering paleopathological and paleoparasitological works were made on the mummies and associated remains. Briefly, the studies were done about Opisthorchiasis in infant remains from the medieval Zeleniy Yar burial ground (Slepchenko et al., 2015); craniometry, osteometry, paleopathology and facial reconstruction of an adult mummy (Slepchenko and Alekseeva, 2014; Bagashev et al., 2016).

- Even so, the general status of these mummies, from the perspectives of information on the conservative status, has not been sufficiently reported to the concerned researchers worldwide. In this regard, in the form of collaboration between archaeologists Alexander Vasilyevich Gusev (Archeology Department, Archeology and Ethnology Sector, SPI YaNAO "Arctic Research Center", Russian Federation, YaNAO, Salekhard) and Evgenia Olegovna Svyatova (Institution of Culture of Sverdlovsk Region "Scientific Production Center on protection and use of monuments of history and culture of Sverdlovsk Region." Ekaterinburg); and paleopathologist Dr. Sergey Mikhailovich Slepchenko (the paleopathologists of Institute of the problems of Northern development, of Siberian Branch of the Russian Academy of Sciences Russian Federation, Tyumen), we try to obtain the biomedical information in general from these Zeleny Yar mummies.

- The current project is not designed for getting specific anthropological or paleopathological information from the mummies. Rather, we hope to see if the preservation status of these mummies is ideal for future researches by many pioneering scholars. 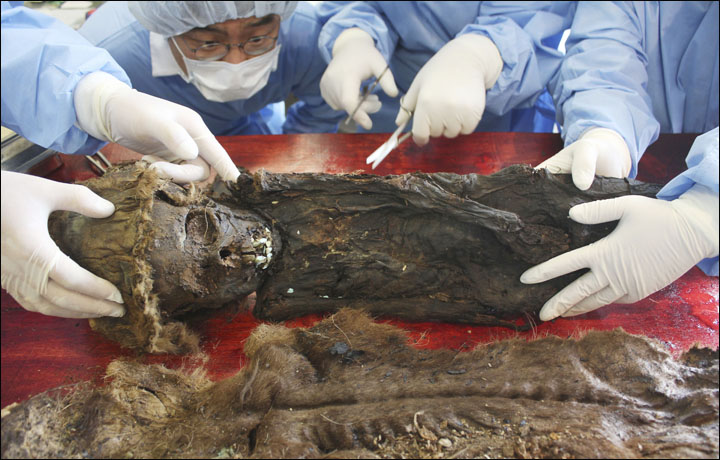